The Good(s) and Bad(s) of Affordable Care Act 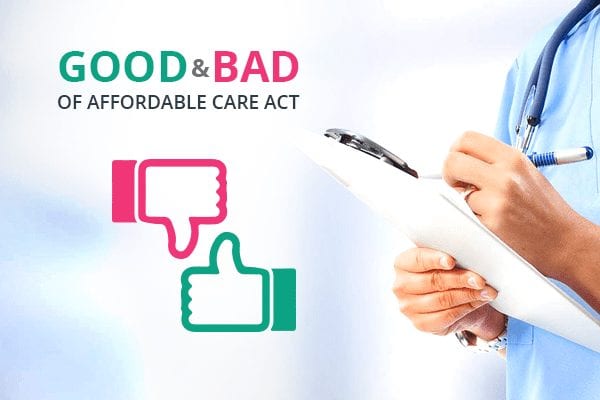 President Obama’s efforts at creating conducive health care facilities for the people in America resulted the introduction of the Affordable Care Act (ACA) in 2010. Also known as Obamacare, the policies have made revolutionary changes in the entire health care scenario in the USA.

To understand ACA’s performance, we first need to know how the health care industry looked like before ACA came to the market:

Opinion about health insurance before Obamacare

Various polls have shown that people liked their health care policies before ACA got introduced. They did not feel that they were spending a lot of money on health insurance.

88% of the employees with employer-based plans were greatly satisfied too.

Status of health care in the U.S. Before Obamacare

A 2008 report in a popular cancer related journal said, cancer treatments are far better in the USA than its Canadian or European counterparts:

President Barack Obama and other democrats produced the following stats in support of Obamacare – almost 15% of the U.S. population was uninsured. 46 million people including some 8 million children did not have any kind of health coverage. The government was of the opinion that private insurers were not being able to administer health care to all the people in America. If the government took charge of the situation, many more people would receive the facilities provided by health care providers.

Whether the stats provided by the U.S. Federal Government are absolutely accurate or not is debatable. What needs to be checked is how the health care system looks like now, after the ACA has been successfully implemented.

What effect ACA will bring to the health care industry is something we all need to wait and see. The goal is to make things easy and more accessible for the public.