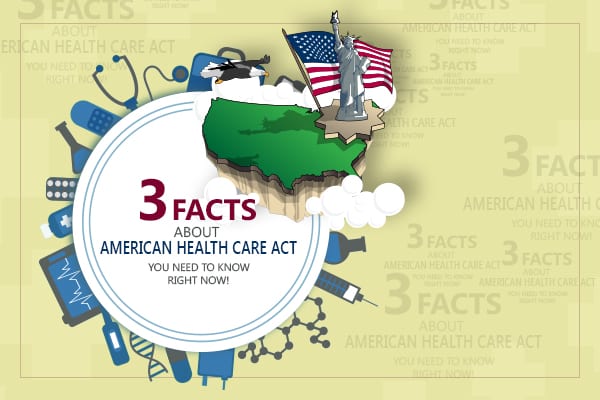 One of the first things that President Trump wants to address is the repeal and replace of the ACA otherwise known as ACA.   Their plan is a process, which includes a reconciliation bill that only requires a majority of votes through the House and Senate, in which only partial parts of the ACA can be repealed and some of the provisions that they want to enact as can be added.  Then there is the regulatory portion that HHS secretary Tom Price is looking to undo some regulations that they believe can help drive down costs and then what could be the most difficult is create new legislation to supplement the law which would require a 60 votes in the Senate to become law. The first portion is what we will concentrate on which is the American Health Care Act (AHCA), in their official website, clearly highlights approaches by the means of which Americans will be relieved of taxes and mandates as under Obama care policy.

So, here’s bringing you the top 3 facts about the proposed health care reforms by President Trump…

The AHCA is currently backed by House Ways and Means Committee and Energy and Commerce Committee. The Republicans are attempting to come together in support of the bill with this reconciliation bill, if this goes through it will most likely be on a largely partisan basis.

The proposed bill is now expected to be forwarded to the House Budget Committee and later to the Rules Committee for further amendments. According to Paul Ryan, Speaker of the House, Congress may pass the bill during Budget Reconciliation process i.e. by April.

•  Undo taxes as in ACA: Republicans will be relieved of ACA’s taxes as levied on OTC and prescription drugs, health insurance premiums or on health check-up devices.

•  Repeal ACA subsidies: To help Americans avail better health care options that are tailor-made to their health conditions and needs, ACA subsidies will be replaced by fixed tax credits for low and middle-income individuals / families (between $2,000 to $14,000 per year).

•  Repeal Medicaid expansion in ACA policy: Medicaid will be strenthened based on “per capita allotment” to extend qualitative, affordable and state-based insurance to low-income Americans.

•  Eliminate ACA penalties on individuals and employers: None will now be forced into inaffordable ACA plans that penalized individuals for not insuring their health. Also, employers with up to 50 employees will no longer pay penalties for not offering health insurance benefits to its workforce.

•  Continuous coverage: Insurers can now charge a surcharge of 30% on the health insurance premiums of those whose coverage has been lapsed for over 63 days.

•  Health insurance for young adults: Dependants of age up to 26 years will still access health insurance under their parents’ plan unless they can afford their own.

•  Patient and State stability fund: States will be provided a budget of $100 billion to attend to unique needs of patients and make health care affordable for low-income groups.

•  Promote Health Saving Accounts (HSAs): Americans and their families will have the priviledge to expand their HSAs to spend their dollars on health care as per their specific needs by doubling their contributions.

With abundance of reviews in favor and in opposition from across the country, it is difficult to comment on the outcome of ACA repeal initiative. But, what remains significant is that the newly proposed bill is subject to amendments and face plentiful challenges throughout its way until it is finally passed and implemented by the House. Irrespective, Americans sure are anticipating an array of health care benefits to follow in the future of American Health Care Act.