Are You and Your Family Getting All the Vaccines You Need? 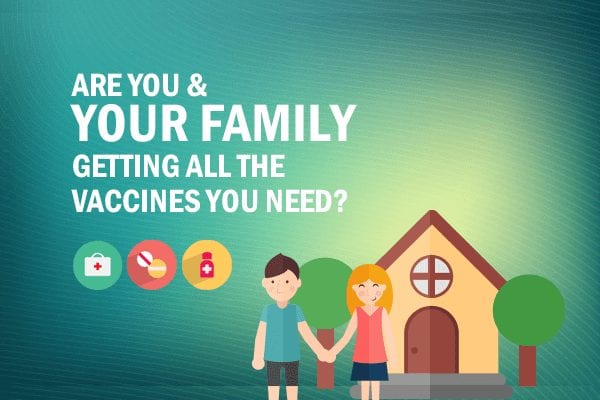 August is National Immunization Month. Learn all the facts to help keep your family safe.

It is important to learn all about immunization and make sure you and your family has taken the necessary vaccines. The World Health Organization has put together useful information on immunization that helps spread awareness. Please read below:

Immunization averts an estimated 2 to 3 million deaths every year from diphtheria, tetanus, pertussis (whooping cough), and measles; however, an additional 1.5 million deaths could be avoided if global vaccination coverage improves. Global vaccination coverage – the proportion of the world’s children who receive recommended vaccines – has remained steady for the past few years.

During 2015, about 86% (116 million) of infants worldwide received 3 doses of diphtheria-tetanus-pertussis (DTP3) vaccine, protecting them against infectious diseases that can cause serious illness and disability or be fatal. By 2015, 126 countries had reached at least 90% coverage of DTP3 vaccine.

Have you taken the necessary vaccination for the following diseases?

Haemophilus influenzae type b (Hib) causes meningitis and pneumonia. Hib vaccine had been introduced in 192 countries by the end of 2015. Global coverage with 3 doses of Hib vaccine is estimated at 64%. There is great variation between regions. In the Americas, coverage is estimated at 90%, while it is only 25% and 56% in the Western Pacific and South-East Asia Regions respectively.

Human papillomavirus is the most common viral infection of the reproductive tract, and can cause cervical cancer, other types of cancer, and genital warts in both men and women. Human papillomavirus vaccine was introduced in 63 countries by the end of 2015.

Measles is a highly contagious disease caused by a virus, which usually results in a high fever and rash, and can lead to blindness, encephalitis or death. By the end of 2015, 85% of children had received 1 dose of measles vaccine by their second birthday, and 160 countries had included a second dose as part of routine immunization and 61% of children received 2 doses of measles vaccine according to national immunization schedule.

Meningitis A is an infection that can cause severe brain damage and is often deadly. By the end of 2015 – 5 years after its introduction – more than 235 million people in African countries affected by the disease had been vaccinated with MenAfriVac, a vaccine developed by WHO and PATH.

Mumps is a highly contagious virus that causes painful swelling at the side of the face under the ears (the parotid glands), fever, headache and muscle aches. It can lead to viral meningitis. Mumps vaccine had been introduced nationwide in 121 countries by the end of 2015.

Pneumococcal diseases include pneumonia, meningitis and febrile bacteraemia, as well as otitis media, sinusitis and bronchitis. Pneumococcal vaccine had been introduced in 128 countries by the end of 2015, and global coverage was estimated at 37%.

Polio is a highly infectious viral disease that can cause irreversible paralysis. In 2015, 86% of infants around the world received 3 doses of polio vaccine. Targeted for global eradication, polio has been stopped in all countries except for 2: Afghanistan and Pakistan. Polio-free countries have been infected by imported virus, and all countries – especially those experiencing conflict and instability – remain at risk until polio is fully eradicated.

Rotaviruses are the most common cause of severe diarrhea disease in young children throughout the world. Rotavirus vaccine was introduced in 81 countries by the end of 2015, and global coverage was estimated at 23%.

Rubella is a viral disease which is usually mild in children, but infection during early pregnancy may cause fetal death or congenital rubella syndrome, which can lead to defects of the brain, heart, eyes and ears. Rubella vaccine was introduced nationwide in 147 countries by the end of 2015 and global coverage was estimated at 46%.

Tetanus is caused by a bacterium which grows in the absence of oxygen, for example in dirty wounds or in the umbilical cord if it is not kept clean. It produces a toxin which can cause serious complications or death. The vaccine to prevent maternal and neonatal tetanus had been introduced in 103 countries by the end of 2015. An estimated 83% of newborns were protected through immunization. Maternal and neonatal tetanus persist as public health problems in 19 countries, mainly in Africa and Asia.

Yellow fever is an acute viral hemorrhagic disease transmitted by infected mosquitoes. As of 2015, yellow fever vaccine had been introduced in routine infant immunization programs in 35 of the 42 countries and territories at risk for yellow fever in Africa and the Americas.

Take advantage of preventive care services that offer most of these vaccinations for free. If you are covered by ACA plan, make sure you avail the free services.