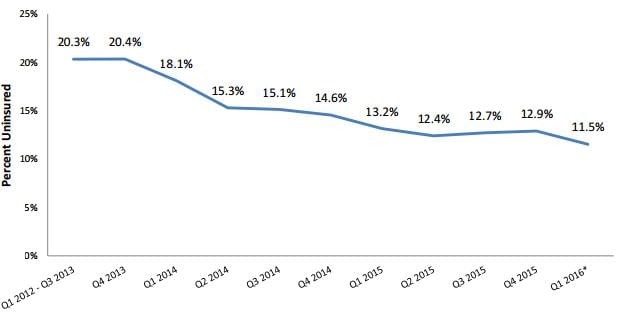 Private health insurance is the primary type of health coverage for the major part of people in the United States (approximately 58% of all Americans opt for private health coverage). For senior citizens and children and economically challenged families.

Public health coverage is the other one. Public programs include Medicare, Medicaid, SCHIP, TRICARE and the Veterans programs also provide coverage. Suppose if you are not covered by a public coverage program, or if your coverage is partial, you are bound to have health insurance plans from some kind of private health insurance marketplace.

People were considered “insured” if they were enrolled in any health insurance plan for the whole or part of the previous calendar year. They were considered as uninsured, for the entire year, if they were not covered by any type of health insurance. Since millions of Americans have no health cover at all. Most studies reflect that the number of “uninsured” at over 46 million and most people have inadequate insurance.

Quarterly Uninsured Rate Estimates for Adults (Ages 18 to 64) Using the Gallup-Healthways well-being index, from 2012 to 2016:

The most recent available estimates from the National Health Interview Survey (NHIS) show the uninsured rate was 9.1 percent over the first nine months of 2015 for people of all ages, including the elderly and children. For children (ages 0 to 17), NHIS reports uninsurance rate of 4.5 percent (corresponding to 3.3 million children) up to September month of 2015, a 31 percent drop from the rate in 2013 (6.5 percent, referring to 4.8 million children). (Accordingly, based on NHIS estimates, 1.5 million children gained health coverage in 2013 to first 9 months of 2015.) The NHIS report is available at:

“The Patient Protection and Affordable Care Act” says that every American must have medical insurance, or they will be entitled to pay a fine.

Right Insurance – The buyer should be aware of several factors while choosing the right insurance. For example, is prescription coverage included in the health plan or not? or A female of childbearing age would prefer a plan which covers pre-natal visits.

Open Enrollment Plan Selections in the Health Insurance Marketplaces, 2014 to 2016:

Deciding on what best suits you depends on your current circumstances and those of your family’s, may seem confusing and dismaying. In this case, health insurance marketplace helps you to pick the right one.