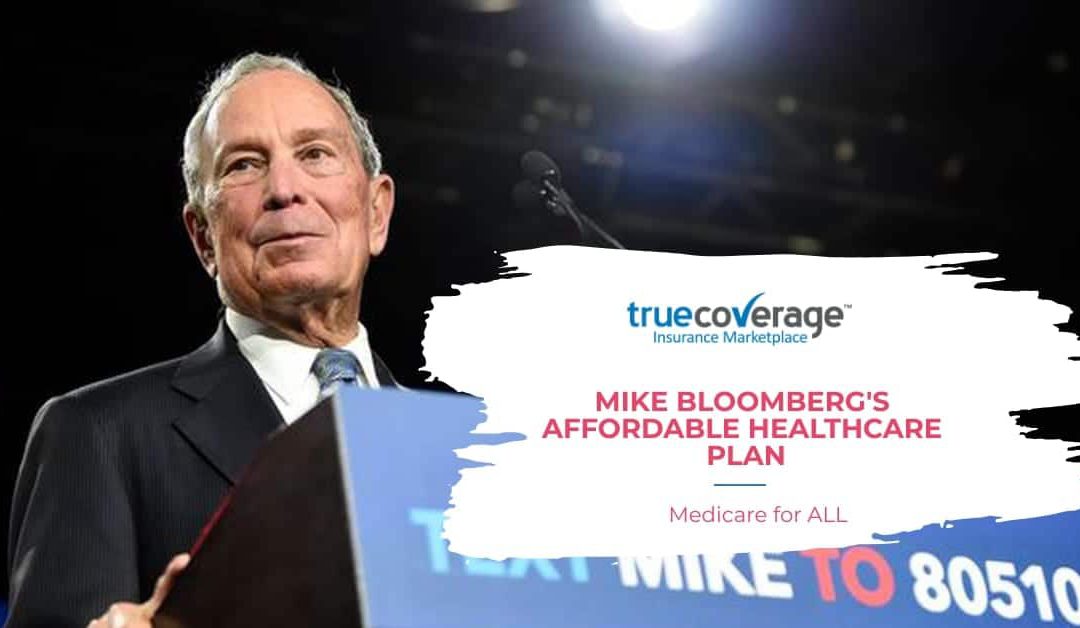 Just recently the TrueCoverage team wrote an article ‘MEDICARE FOR ALL EXPLAINED’ and concluded that while the Democratic party had a distinctly different approach to funding national healthcare from the Republicans, they had yet to find ‘a policy which values enterprise and recognizes that the demand for ANYTHING FREE is infinite.’ In this article, we consider Mike Bloomberg’s stand on ACA and his vision of an affordable healthcare plan.

Whereas Sanders talks of ‘Medicare for all’ Bloomberg’s idea is to introduce an affordable healthcare plan, federally run, as a public option alongside the privately insured ACA.  Read about Bernie Sanders take on Medicare for all: Read more

The public insurance option would be aimed initially at the uninsured and low-income families in states which have not expanded Medicaid under ACA.

Mike Bloomberg’s ‘affordable healthcare plan’ can be described as having three objectives. They are to: –

The public health insurance (PHI) option would be administered by the federal government (not for profit) but paid for by customer premiums. The same tax reliefs and subsidies would apply as for plans bought on the health insurance exchanges. Individuals would be allowed to keep their private insurances.

At the same time some of Bloomberg’s ‘health care price capping’ and ‘cost control’ initiatives would make ACA compliant plans more affordable and increase the uptake of private health insurance. Currently, approximately 28 million Americans do not have health insurance and a further 41 million are thought to be under-insured.

Some counties do not have full (or any) health insurance coverage.  Mike Bloomberg’s stand on ACA would remove this injustice by bringing PHI to the market place.

Widen the range of services

Approximately 30% of US citizens do not visit their dentist regularly, nor do they seek preventative care for hearing and vision.  Bloomberg intends to include these as Medicare options and for all states to include oral health services for all adults in the ‘Medicaid’ program.

It is generally agreed that the cost of providing healthcare in the USA is too high (nearly 2x that of other developed countries).  The evidence suggests that in many areas (for instance, life expectancy and infant mortality) the outcomes are worse than in other advanced nations.

Extending coverage and widening the range of services are not, in themselves, going to reduce the cost of treatment and care. They should, of course, improve overall outcomes, e.g. life expectancy and infant mortality.

Bloomberg’s approach is to ‘cap’ individual’s premiums to 8.5% of household income.  This may be good news to us as individuals but will make additional demands on federal taxes.

He proposes various other caps. For example, on out-of-network charges and most significantly, on the price of medications including prescription drugs.  Bloomberg’s affordable healthcare plan would restrict US drug prices to 120% of the average price charged in other advanced nations. To illustrate the problem, some prescription drugs are available in Canada for approximately 30% of the cost of the same drug in the USA.  This may be good news for the US citizen with a chronic need but could have a huge revenue/profit impact on major US pharmaceutical companies.

The main influence on our choice of drugs is the pharmacist who fills our prescription.  Bloomberg proposes to ban payments to pharmacists by drug companies seeking to obtain preferential treatment.  No one should be incentivized to persuade us to buy a branded drug when the generic alternative is just as effective.

As we describe, Bloomberg offers a range of ideas to promote competition and efficiency while maintaining the ethical standards of Medicare, Medicaid and the ACA.

One further idea is to create a permanent reinsurance program.  This is common practice in most areas of insurance.  It encourages insurers to insure themselves, i.e. spread their risk of having to meet extreme claims. This would enable them to reduce premiums to their clients: Bloomberg claims by 10%.

Donald Trump takes a laissez faire approach, reckoning that market forces will eventually determine a health care system where demand is met at an affordable price without the intervention of the federal government and minimal involvement of individual states.

The single payer system proposed by Sanders is entirely at odds with Republican ideology and is indeed not widely endorsed by his own party.  It would involve the complete dismemberment of existing structures.

In broad terms we devote some $3.5 trillion on the US health care system ($ spent either directly by us as individuals or indirectly through federal and state taxes). About 16 million people are employed within the system and millions more in supporting industries, such as pharmaceuticals and insurance.

Bloomberg’s proposals deserve consideration for their recognition of the multi-dimensional nature of the problems health care faces and the need to build on existing structures for the benefit of the whole nation.