5 Damages on Women Obamacare Repealing Will Cause 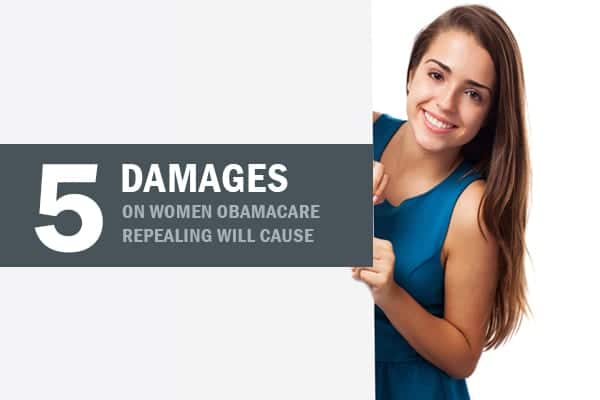 Only after 2 years of successful implementation of Obamacare in the US healthcare sector, the health insurance policy has come to face major challenges from the Democrats. One of the major focus of the President elect, Mr. Donald Trump was to either completely change the Obamacare policies, or at least make major changes in it.

A recent development with some of the democrats makes the matter more serious. According to Washington Post,

“Senate Democrats will never vote to repeal Obamacare. But, once the deed is done, a surprising number of them say they’re open to helping Republicans replace it. If it makes sense, I think there’ll be a lot of Democrats who would be for it.”

ACA or Obamacare can really make the healthcare scene better in the USA healthcare marketplace. Trump’s idea of repealing the ACA can be damaging for many, especially women. There were quite many developments made for women specifically under ACA. Repealing ACA would mean all these facilities provided to the women would also be taken away, leaving them vulnerable to various health hazards.

There are various hurdles that come in providing healthcare benefits to women. They are more likely to get health coverage through their spouse. In case of events like divorce, death, or any major accident, where her spouse loses his earning, she is left with no health coverage at all.

To give you a proper idea of what all damages women will face if the Republican’s plan to repeal Obamacare are mentioned in this blog.

Gender tax will be implemented again

Earlier, before gender tax was implemented, women would pay as much as 80% more than what men would pay for health insurance plans. Insurers were free to to cancel the insurance of a woman if she was found having pre-existing conditions. Obamacare helped remove all these conditions and provided women with much easier access to health insurance plans. They received equal amount of facilities like men enjoyed in the affordable healthcare marketplace.

A study says, almost $20,000 in an average is required to bear a child and give birth. Most families cannot afford to shell such amount to give birth to a child in America. This has resulted into many abnormal and imperfect births given by women, as no coverage was there before 2011.

From 2011, Obamacare was implemented and pre-natal care plus child-birth came under the health insurance provider’s coverage. Hence, women were not cutting down on their expenses during pregnancy. They visited good hospitals and doctors for delivery.

If Uncle Sam chooses to repeal Obamacare, the prenatal and child delivery coverage under the affordable health insurance plan scheme will not be there.

If a nation wants to prosper, it must take care of its women and children well.

Many preventive services like tests and screening free for women

ACA had under its health insurance marketplace some rules specifically meant to help women. Before ACA or better known as Patient Protection helped close to 30 million people with preventive care screenings like cervical cancer treatments, mammograms, ECG, and so on. Insured women could access to best doctors and hospitals without spending sums on out-of-pocket and copay deductions.

What is not realized is- once Obamacare is repealed, all these facilities that has brought better health condition for the women of USA will be gone. A healthier lady produces healthy kids, better future for the country. From a healthy future, this country is again going to go back to old days of misery.

Birth control pills at no cost

Obamacare made birth control pills available free of cost. 2013 saw $483 of birth control, reports IMS Institute for Healthcare Informatics. According to ACA law, all kinds of prescription drugs on birth control should be paid at zero out-of-pocket expense.

Even the percentage of women who received their intrauterine device with with no extra payments has shot high. Getting these cures and tests at no cost actually helps control a lot of unwanted child birth; a cause to increasing poverty.

If Republicans repeal this policy as well, it can lead to uncontrolled growth of population, uncontrolled birth, poverty and unhealthy living conditions.